Back to all posts

The Great Lorenzo, The Peruvian Heartthrob of 1968!

Sometimes a good laugh or two can be the best stress reliever in discouraging times.

The following is a true story about the power of unfounded rumors which for a very thin sliver of time transformed me into “The Great Lorenzo, Peruvian Heartthrob of 1968.”

If I have your curiosity by now, read on.

In the summer of 1968 I spent six weeks in South America. There was a program at my college called Tri-S, (Student Summer Service), which allowed students to spend a part of their summer in a foreign country. I chose Peru and flew there with about a dozen of my college classmates from Anderson College, Anderson, Indiana.

We spent the bulk of our time in the city of Arequipa near the Andes Mountains, and our task was to help build a school, which in reality meant we shoveled dirt and carried rocks. Before I go any further, let me say there was once a time in my life when I was slim, even skinny. Before I got on the plane in Miami, I decided to comb a hefty amount of Sun-in peroxide in my hair which turned it a bright blonde instead of the normal dirty dishwater. I also didn't wear glasses. So, at least in my own deluded mind, I thought I looked fairly “hip” at the time.

One day at work we were informed by our coordinators that an all-girls middle school had invited us to put on a talent show for an assembly program. We had teamed up with some students from a college in New York, so when the call went out for volunteers, we ended up with three acts. There was a girl who played the trumpet, plus two guys who were folk musicians, and finally there was me. I had not begun to sing at that time but did play the piano. For my set, I decided I would play two songs. My first number would be my trademark “Boogie Woogie”, which I had perfected in high school. I would follow that up with an instrumental version of the Petula Clark hit, “Downtown.” (I had been listening to Peruvian radio and had noticed that “Downtown” had just broken into the charts there, a good four years later than the rest of the world.)

When we arrived at the school, we were informed our three-act revue had been pared down to one. The trumpet player had suddenly come down with a massive case of stage fright and was throwing up in the parking lot. Then the Smothers Brothers wannabes sheepishly announced they had moonlighted at a nightclub the previous night and they had forgotten to take their guitars home with them. This left the skinny, peroxided piano player from South Carolina with the sole responsibility of promoting world peace. This is where the story becomes bizarre. 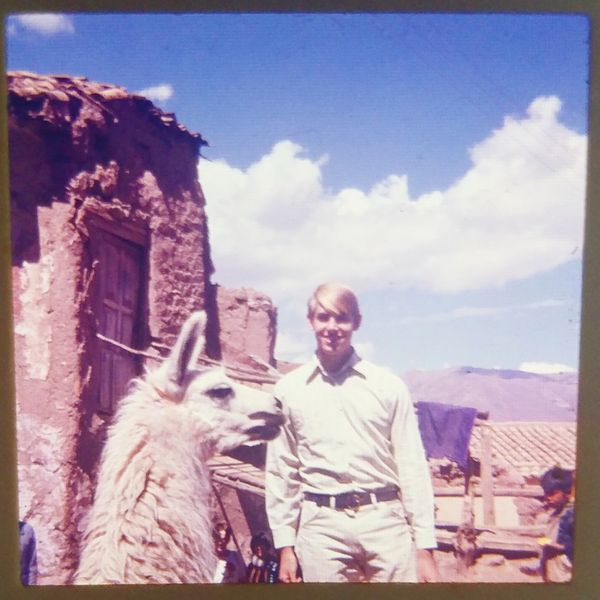 Unbeknownst to me, a rumor had begun to float throughout the student body that the performers at the talent show were going to be well- known recording artists and stars from the United States. So, after being introduced by my Spanish name, Lorenzo Chewning, I ambled across the stage to sit down at the piano and play my two numbers. Before I hit the first note, I was startled to hear a couple hundred girls shrieking and screaming at the top of their lungs, “Lorenzo!!! Lorenzo!!”

I was flabbergasted and couldn't believe what was happening. It was as if I was one of The Monkees, on a Latin American tour! I launched into the Boogie Woogie and the girls got out of their seats and started dancing in the aisles. Then three or four of them crashed the stage and were dancing all around the piano and touching my arms as I played. I tried with all my might to stay focused. Over in the corner by the stage curtain was a ferocious-looking lady principal who could have been hired as a linebacker for the Chicago Bears. As I continued playing, she came storming onto the the stage and kept ordering the girls to go back in their seats.

I finished the Boogie Woogie with a Jerry Lee Lewis-style flourish down the keys, and the crowd erupted again into deafening screams, chanting “Lorenzo! Lorenzo! Lorenzo!”

My second and final song, “Downtown,” brought the house down again because they were all familiar with it on the radio. They were swaying back and forth as I played it, and every time I came to to the title line, they would sing in loud unison, “DOWNTOWN!” As I took my bow and walked off the stage, it wasn't long before I faced a sea of fans with torn scraps of paper in their hands, asking for my autograph.

By then, I was playing the part to the hilt, enjoying every second of the adulation. Now this should be the end of this story. However, chapter two unfolded about a week later.

I had this little routine every Thursday afternoon when we finished shoveling for the day. I would take a taxi to the main square of the city and buy an English language copy of, Time magazine, since this was the only way I had of keeping up with the news.

On this particular Thursday the taxi driver asked if I would mind if he picked up a few more passengers on the way uptown. I replied in broken Spanish this would be fine. So take one guess where the taxi driver decided to stop to pick up extra passengers. The school! Yes, that school, the scene of Lorenzo-mania the previous week.

When the final bell rang and the girls starting making their way through the gates to go home, one of the students stopped dead in her tracks, gasped, started jumping up down, and screamed, “LORENZO!!!” Within a few seconds the car was surrounded by a crowd of teenybopper girls knocking on the car windows, waving at me, handing more scraps of paper through the crack in the window for me to sign. The poor taxi cab driver looked like a llama caught in the headlights and didn't know what hit him.

One girl flung herself on the hood of the car and gazed through the windshield to get a glimpse of the famous American star. A couple of girls got into the taxi to be taken home, which I think was pre-arranged by their parents. Then the cab driver began beeping the horn, moving a couple of feet at a time, then honking again, slowly parting this crowd of adoring senoritas.

Once we finally made it to the main highway, the girls in the car just looked at each other from time to time and giggled. They didn't talk until they got out of the car and then they grinned and waved and exclaimed, “Adios, Lorenzo!” When the cab driver dropped me off at the main square, he had obviously fallen for it, too, because when I went to pay him, he said, “No, No, Senor. No charge.” And then it faded almost as quickly as it appeared.

I had one more very brief whiff of recognition about two weeks later. All of us college students were on a train from Arequipa to the ancient ruins of Machu Picchu, a distance of around two hundred miles. I was sitting in my seat looking out the window when a teen-aged girl walked by and calmly said, “Hola, Lorenzo” in an almost business-like voice. No adulation or excitement at all. She gave me the same kind of greeting a person would give their mailman walking down the street. I knew at that moment my mystique had lifted. I had already peaked, a mere three weeks after being discovered. It's been downhill fame-wise ever since.

However, every now and then, when the oldies radio station plays a refrain of “Downtown” by Petula Clark, I think wistfully back to that memorable summer below the equator, when a skinny, peroxided, nineteen year-old country boy from South Carolina was the Peruvian Heartthrob of 1968!